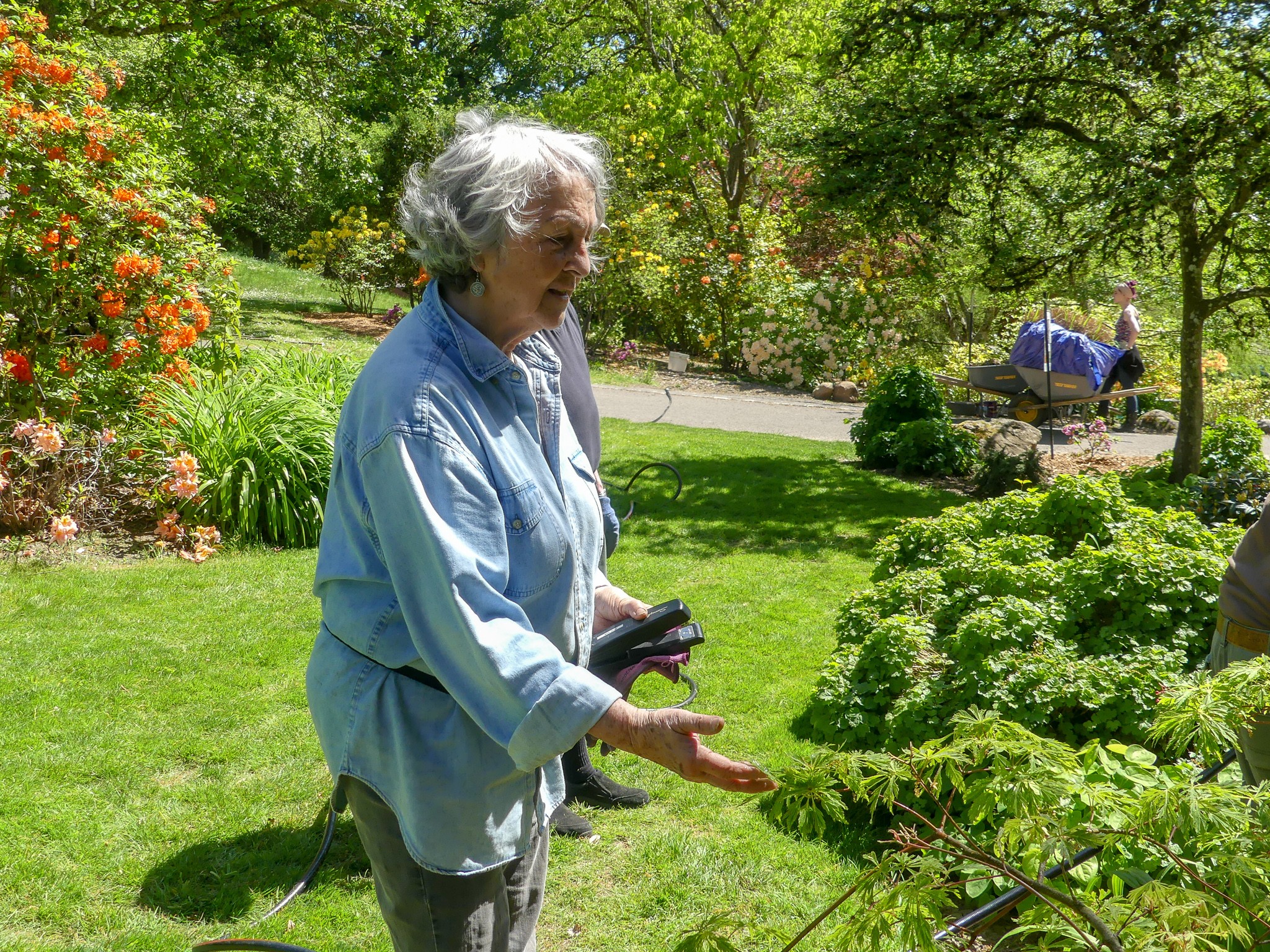 A longtime group of volunteer gardeners in Bush’s Pasture Park has formed a new nonprofit organization that wants to do more to take care of the park’s historic trees, roses and other plants.

Gretchen Carnaby, a garden designer and co-founder of the Mission Street Parks Conservancy, shows off a Japanese maple the group planted in the Bush Pasture Park ravine. (Rachel Alexander/Salem Reporter)

The group was finishing a landscape renovation of the small stream channel running under the park’s main trail just south of the playground.

“We always called it the ravine, but the public has referred to it as the ditch,” said Gretchen Carnaby, a longtime volunteer and board member for the Mission Street Parks Conservancy.

What was once largely bare dirt with some overgrown bushes and rocks has been transformed into an area with boulders to sit on and more ornamental trees, including magnolia and flowering cherry.

It’s the first major project completed by the Conservancy since the group changed its name, hired its first staff member and decided to take a more active role in preserving the park last year.

Their goal is to work on garden and landscaping projects and catalog and care for the park’s historic plants and trees.

Bush’s Pasture Park takes up about 90 acres in central Salem, just south of downtown, and was once the estate of Oregon settler and entrepreneur Asahel Bush II, who bought the property at what was then the city’s southern outskirts in 1860.

The Bush family donated a portion of the property to the City of Salem in 1917 following Bush’s death. The city purchased 33 more acres in the mid-1940s, and inherited the rest of the property in 1953 when Bush’s last son died.

“We want to be part of the solution,” Carnaby said.

Brian Smith, the lone horticulturalist on city staff, said the group’s work in the park has allowed for projects he doesn’t have time to take on.

“They are consistent, rain or shine, weeding, planting, mulching,” he said.

The group has existed in some form since 1979, when volunteers formed the Bush Conservatory Gardeners to care for plants in the park’s greenhouse. When Salem cut parks staff in the 1980s, the group recruited volunteers and began mulching rose beds. In the 1990s, it opposed a proposed expansion of Mission Street that would have cut into park land.

For years, a weekly crew of volunteer gardeners helped care for park plants. But now, they want to do more.

Michael Slater is a recent board member and now serves as the conservancy’s first paid employee, a role he said is temporary to help the group ramp up its presence and hire more permanent staff.

He and Carnaby created the conservancy last year as a successor to Friends of Bush Gardens, an unincorporated organization, and brought in new members. Since forming, the group has raised about $80,000 and filed to become a nonprofit organization.

Slater has spent much of his career in nonprofits, working remotely from Salem as president of Project Vote, a voting rights advocacy group based in Washington, D.C.

After the 2016 election, Slater said he turned to gardening as therapy to help him cope with his sadness and disappointment. That led to his involvement in the park and eventually, to a decision to take a break from his career and focus on growing the conservancy.

Now, he can walk visitors around the park and narrate the history of landscape architects Elizabeth Lord and Edith Schryver, who designed much of the original rose garden and garden beds in the northwest corner.

“We think of it as a special place,” he said. “This is one of the earliest parts of Salem.”

Slater wants to raise about $150,000 a year through grants and membership dues so the group can hire a full-time gardener and half-time coordinator to further their work.

Volunteers weed in the ravine before a scheduled public opening on May 11, 2019. (Rachel Alexander/Salem Reporter)

Earlier this year, the conservancy began work to preserve historic crabapple trees in the park, inviting local nursery owner Lucille Whitman to take cuttings from four species that are no longer available in commercial nurseries.

Whitman will graft those cuttings onto trees at her nursery and care for them until they’re ready to be planted in the park, Slater said. They’ve also ordered new trees to replace some in the park that are in poor health.

Slater also wants to map the existing trees and digitally catalog them. There have been efforts to do hat in the past, he said, but labels marking a tree’s species have fallen off.

Carnaby said she hopes the ravine overhaul will show the public what the group can do with a small budget of about $8,000. They’re also seeking funds to add a rock scramble area for kids to play on next to the ravine.

“This is the kind of thing they can expect,” she said.

Anyone wishing to volunteer with the group or learn more can come to the park Tuesday mornings, where volunteer gardeners work from about 9 a.m. until noon, or visit the conservancy website.