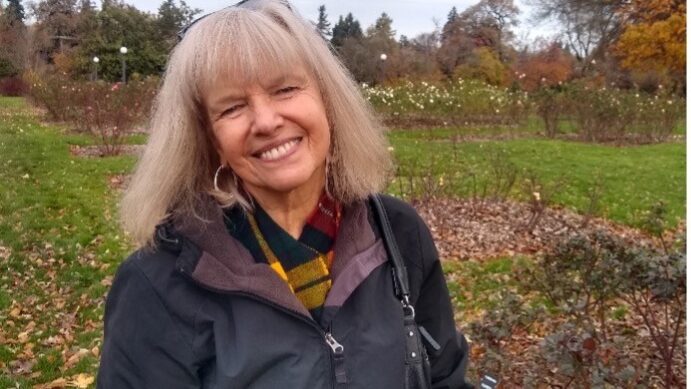 Debbie began thinking about plants after moving into a new house in Salem that lacked landscaping.  Knowing nothing about landscaping and gardening, Debbie began to educate herself by reading gardening books and visiting public and private gardens throughout the Willamette Valley.  Now, years later, Debbie has earned the nickname Digger Deb for her deep knowledge of plants and willingness to “dig in.”

Debbie studied English literature and art history at UCLA.  She has lived in Oregon for over 40 years, since a visit to Oregon lured her north.  She picked Salem because it seemed close to everything – the mountains and the coast.  Although she arrived without a job, it did not take her long to find work with the Oregon Legislature as a committee assistant.  Debbie worked in state government for many years, including in the office of Governor Vic Atiyeh.

Eventually, Debbie decided to pursue her love of art and art history by getting a master’s degree focused on 19th Century French art from the University of Oregon.  Debbie’s art background comes through in her love of and appreciation for good garden design.

Debbie came to volunteer at Bush’s Pasture Park after seeing a newspaper advertisement seeking volunteers for the Tuesday Gardeners in 2005.  She showed up to dig in the mud with a few other hearty souls and hasn’t stopped since.  She has worked on Mission Street Parks Conservancy’s Events Committee and currently serves as a member of the Rose Garden Committee.  She contributes extensively to the Conservancy’s Facebook page and to the informational postings at the kiosk near Bush House.

Debbie’s fellow gardeners know her as a reliable source of information about plantings in the park, including her unerring ability to tell a weed from a flower.  (Not as common a talent as one would suppose!)  Debbie is also known for her endearing habit of calling people “honey,” as in “Oh, honey, don’t pull those flowers out.”

In addition to all things plant-related, Debbie loves cooking and eating, exercising, and travel, especially to Europe.

Thanks DD, for all you do!