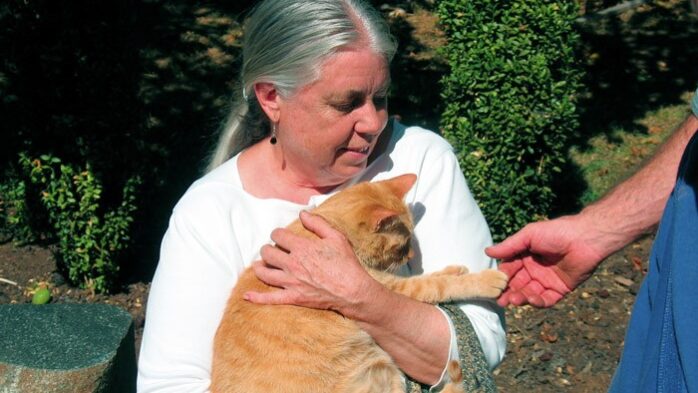 Donna Shepard is one of our dedicated greenhouse Tuesday Gardeners..  She’s been volunteering with our group for over 20 years, starting back in the days of the Friends of Bush Gardens.  I’m always curious to know what brought someone to the Tuesday Gardener group to begin with.  For Donna, it was a lecture on winter plants back in 1997 or 1998, given by our former garden manager, Gretchen Carnaby.  Donna was captivated listening to Gretchen’s great stories from the park.  She thought, “I need to be a part of this group!”  Back then, our group had only about 6 regular Tuesday Gardeners and much of the work was literally in the weeds pulling up the dreaded nutgrass.  So much nutgrass!  After about 4 years and an injury, Donna needed a break and took a few years off.

When she came back, she joined Barbara Roach in the greenhouse learning all about the conservatory plants.  Over the years, Donna also worked with the Lord & Schryver Conservancy and at The Deepwood Museum and Gardens.  In fact, she still works at the Deepwood greenhouse today.

Of course, she has her own garden to tend.  She lives in a house built by her in-laws with a yard that was a perfect blank slate.  Today some of her garden favorites are Rose of Sharon “Blue Satin,” Yellow Peace Rose, and a very well established blue clematis.

Her early years were spent on a dairy farm in Wisconsin and as a young woman Donna was keen for an adventure.  She headed out to California to join some friends.  She had always wanted to be in medicine. Unfortunately, for young women of her generation, becoming a Registered Nurse was an easier route than pursuing the male-dominated medical school path.  She worked at the LA County Hospital in the thoracic ward and saw all the knifing and gunshot wounds.  Let’s hope she sees no more of those!!

In California, she met her now former husband who was originally from Salem.  They moved back here where she settled in nicely.

About three years ago, while working in her beautiful garden, Donna had a heart attack.  Fortunately, she was able to get inside to call 911 and stay connected until help arrived.  Her sense of humor was evident as we joked about the only silver lining to her heart attack was seeing the four handsome EMTs gathered around her.

She volunteers in Salem’s gardens driven by a desire to get outside.  In retirement, she’s enjoying being older and having the ability to do what she wants when she wants.  As a former nurse, her nurturing instincts now get applied to her plants. Her volunteer efforts are prime examples of who she is and her values.  She believes that everyone should do something to give back to their community.  Our park and especially our Bush greenhouse are true beneficiaries of this belief.

The MSPC Tuesday Gardeners are lucky to have such a devoted and experienced volunteer who shares not only her plant knowledge but her quick wit too!